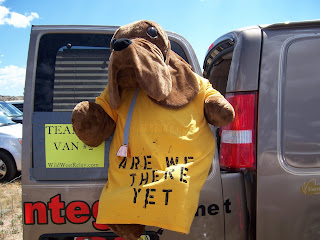 This weekend (Friday and Saturday) I participated in the Wild West Relay (http://www.wildwestrelay.com). A new experience in running for me.

I have always considered running pretty much an individual thing and never really considered running in something like a relay. Maybe I even look down a bit on such thinks...after all how hard is it to run 5 miles every 12 hours....did I ever have an awakening. It was an experience.

I am totally blown away by the team...what a great group of people. Take 12 people from half a dozen states, many who did not know each other and watch with awe as everyone performed above expectation. I am truly proud of them.

The relay is interesting...each leg is anywhere from 3-8 miles or so and that is probably dictated by the availability of a place along the way to allow the team vehicles to park and prepare for the next leg. Teams had 1 or 2 vehicles per team depending on the number of runners in the team. We had 2 vans / 6 per van. One van would track to each exchange point as each of its runners ran their leg and the other van would go ahead to the point that they would be starting from and take the opportunity to catch some rest or sleep (if possible).

The course start in Ft Collins and make its way up to Laramie then back into Colorado to Steamboat Springs. Just shy of 200 miles in all. We were running on highways, something I have not done is a long time. I switched to running trails 10 years ago and rarely venture onto the streets anymore. My legs will attest to this quite loudly.

Our first set of legs was the hardest to face. It was a mostly uphill leg and the temperatures were hovering around 100 degrees. It hurt and everyone really showed their meddle on this leg. The uphill is bad enough but add the temperature to the equation and any sane runner would have gone home..but then we are runners and sane runner is an oxymoron. That being said it was "onward and upward".

The second set if legs treated us a little better. It was around midnight so the temperature was a balmy 40 degrees. It sure felt good after the 1st leg, I would have even been happy with snow but lets get too crazy.

The 3rd and last set of legs which took us into Steamboat and the finish was a mix of uphill early on and downhill. Temperatures were less of a factor but still running in the low to mid 80's and maybe a bit warmer that that for the last leg. The worst climb was in this set of leg but our flatland trooper Coleen gave it a tremendous effort. Having a lot of downhill helped here since we were all pretty tired and running on minimal sleep but downhill also beat you up as payment for leasing a little gravity to help you.

For myself, I must apologize to my team for taking this lightly in the time leading up to the start but that view changed about 10 seconds into the lst leg I ran and was driven home painfully in the last leg. I hope I performed to their expectations. I know I gave it all I could. I will be sore and tired for a few days.

Special thanks to Kelly for organizing this and our volunteers (volunteers are the unsung heros of running) and thanks to everyone for a fun (runner has strange sense of fun!) time. I could almost be convinced to do this again but I will be stopping by the local bionic shop to be fitted for some bionic legs first.