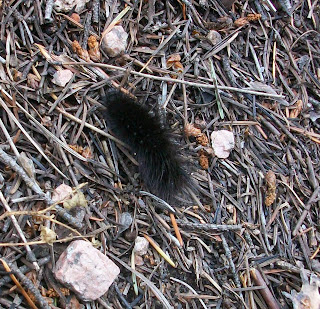 A week ago, some of us explored the area around Mt Herman. The area is not well documented anywhere I could find but it appears most of the trail that we used is known as the Monument Trail but the last part after rounding Rasperry Mountain back to the trail head is not shown anywhere. There is also some references to the area fronting Mt Herman as the Monument Preserve and it appears like there is ongoing efforts to define the usage in this area. Lots of references to too many social trails and the need to control trail usage.

Aside from this, the trail is narrow and rocky but my main point here is that as we ran it, you could sense that fall was coming quickly. Behind Mt Herman which is Limbaugh canyon, a small furry caterpillar displayed its furryness as to say that this winter will be a colder and snowier one.

Since that day, the temperature has dropped dramatically and yesterday, the rain was mixed with snow. As I look out to the front range, there is a lot of snow in the higher elevations. While an early snow can be a false promise, with the amount of rain we have had, I feel a lot of snow may be in the offing this winter. To look at the bright side, this may mean that I can actually do some cross country skiing and snowshoeing without having to travel up the pass. Cross training without having to travel...sounds good to me.

Typically, we can expect a lot of nice days for the next several months even if we get spells of snow and rain. A perfect opportunity to enjoy our abundance of trails. Happy running...
Posted by Farrunner at 8:39 AM 4 comments:

Well it has been awhile since I posted here. Been a busy month with a new job and getting up to speed with its demands. This working stuff puts a crimp on my trails exploration big time. Since I have to be at work at 4:30 am, it has also left me wanting to just sleep when I get off. I have managed to get out and do runs or hikes most days but nothing new to report.

As a proud papa, I can announce my Daughter, Coleen's successful finish at the Leadville 100 last month. Check out her blog for a good write up (cynical dirt doll). She is one tough cookie despite here protestation to the contrary.

With fall approaching, I am looking forward to more runs where the weather is cool and dry. Hopefully there are more trails to lurking around the area to discover.

Just got a call from Jerry...time to go out and do a run...will hopefully not be so long til my next post.

Reminder, with the approach of winter, please add comments to the forum with trail conditions so we can all benefit and avoid going over to trails that are not in good condition due to weather or construction.
Posted by Farrunner at 8:44 AM No comments: