In the past couple of days, I have encountered links to an article that is trying to make the case that high quality running shoes are the source of many of the injuries suffered by atheletes.

As with all things found on the web, I try to approach these things with an open but skeptical mind. Even if the conclusions were faulty (not saying that they are) there is some lessons to be learned from this article.

To read the whole article, go to this article at the daily mail website. It brings up some interesting points.

There seems to be some presenting of examples and opinion where there seems to be a link between injury and running shoes. In my experience, running shoes can be a source of injury but maybe not for the reasons stated. Choosing the correct running shoe for you foot is a hit and miss proposition. And as soon as you find the right one, the shoe manufactures manage to discontinue or change it. I was very lucky in that the Asics GT series performed very well and for about 10 or so years, I used that shoe. Last year, the shoe did not work the same. Looking at comments from other runners, the consensus was the shoe behaved differently. I ended up with plantar faciatis. The latest model seems to go back to earlier performance characteristics.

So in evaluating the claim that the shoes cause injury does not follow from the anecdotal evidence given. Even the statistics do not have the rigor of proper testing. I would be the first to admit that this sort of testing might be quite hard to design and execute. I would also not throw away the studies completely but become more aware of the effect of my shoes on my injury. Remember we are an experiment of one.

With all that having been said, I think there is something to be learned from this article.

I have to agree that spending time barefoot could offer benefits to the runner. The explanations about how the foot molds and grabs when running barefoot reminds me a bit of ball exercise. The premise is that the extra effort to maintain balance exercises small muscles that do not get worked properly. I can see if we always encase our foot in a rigid shoe, it might prevent proper exercise of small muscles, tendons, and ligaments in the foot and ankle. This is speculation on my part but for me, it seems worth adding some activity barefooted. I does not at this point say I am throwing away my running shoes. It might be that I have not suffered the injuries as noted in the article because I am very aware of my feet and try to adjust when I sense something is not right.

In my early running years, I did experiment with running barefoot and as near as I can recall, I did not have any issues. In those days, shoes were not as sophisticated and more like than not, I probably had an old pair of converse sneakers as my "running shoes". I generally ran on grass at the high school but did try to spend some time on the cinder track to toughen my feet.

If I start adding some barefoot adventures to my training, I will be sure to post here what I find out.
Posted by Farrunner at 4:20 PM 3 comments: Links to this post

One last gasp for Winter

At least I hope it was the last gasp. Seems even that little flower did not know what Colorado weather can have instore... 12+ inches of snow and even more in the high country. I guess winter is not going to leave without a fight. This was probably a good time to practice active rest.

Even though I feel that you can run through just about any weather conditions, there are times when a little prudence goes a long way. This recent snow storm was not too bad in this area so it was possible you could run. I don't think though that the streets would be where you would find me for this one. The snow being very wet and the streets were mostly slush so unless you have a full gortex or other water sheding suit, you would probably come back from the run a bit bedraggled. Such a suit is a very nice thing to have and if you are into trails on a big time basis, I would even say a necessity.

The mountain trails can be dangerous even in the height of the summer. Fast moving thunder storms and low temperatures are the receipe for hyperthermia. When ever I am going up into the higher trails where civilization is more that a mile or so away, I alway take my full gortex suite. In addition, I have what I call my backup in the form of a 55 gallon plastic trashbag.

If the weather gets really bad, the gortex is great but in the worse conditions where I might have to hunker down for a while the added layer of the grarbage bag provides the barrier to wind and rain even gortex can sometimes not handle. The nice thing about the garbage bag is that it is light and compact. Since it is alway in my waist pack and I never go without the pack, even when I don't think I will be far enough out to need my gortex, it is there for an emergency. I have even given it away at times to people on the mountain who did not plan ahead and were in danger due to the weather.

I am bringing this up now because as the weather starts to warm, the urge to head up the mountain will grow. The mountain is not forgiving and if you don't respect it, it will win. Always consider the worse might happen and plan accordingly.

Another reason to bring this up now, is that gortex or the now similar fabrics will go on sale for the end of winter. Good time to buy. I saved over a $100 the last time I bought one because it was spring.

Check out the website at farrunner.com. I have been busy adding some new features and trying to improve the presentation of the material. With the advent of spring, I plan to take new pictures and gather more GPS data to put on the site. I have been reworking the format in hopes that it presents the information in a more usable manner.

bob
Posted by Farrunner at 6:29 PM No comments: Links to this post

Me and a cast of thousands

The other day, it was one of those warm sunny days that call for action when they first appear in the spring time.

My running partner called and made a case for heading over to the incline after work for a bit of a climb and run. Well it seems like him and 10,000 of our closest friends, neighbors, and others decided on the same thing. I actually found this somewhat amusing and interesting.

The incline is not the sort of place you would expect to be a popular gathering spot. It is steep, dangerous, unmaintained and 2 degrees short of a cliff and of course, private property...but what appears to be, is the most popular place to go on a nice spring day in Colorado Springs.

I had to marvel at the people that were there. Everyone from training atheletes to family groups all making their way up the incline at their own pace. I kind of had a vision of the "if they build it, they will come" senario. Since I shouldn't have been there, having a serious cold/flu, I was taking it easy so I could observe what was happening.

Men, women, boys, girls, short, tall, skinny, overweight, solo, couples, friends, and some families
all taking on the challenge of one of the more difficult climbs in the area. I had to wonder at what it was that brought them here. Some I can understand as training for some race but others, it was not so obvious as to what their motivations were. The thing that really stood out was the chatter and support everyone gave to each other and the sense of enjoyment and accomplishment they seem to show for their efforts.

Even now, it is difficult to find parking and when the incline is officially open to the public, the situation can only become worse. I know parking is one of the main factors holding up the opening of the incline. I hope a good solution can be found.

I think that maybe I should post a few blogs about the incline that talks to the best way to enjoy it and some safety considerations. Sounds like a good idea for future posts...
Posted by Farrunner at 7:30 PM No comments: Links to this post 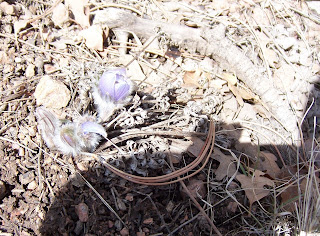 Well despite the calendar, spring has not been knocking on our door with any regularity. Sunday during a small trip up into the high country, nature announced that spring is here. The discovery of these small mountain flowers has always meant that the worst is over and better weather is ahead. Unlike the woolly caterpillar, these flowers seem to pop through the last of the winter snows. After the blizzard like conditions a few days before, I hope they are right.

So put away the tights and gloves and be ready for warmer runs, longer days and the upcoming races season!
Posted by Farrunner at 7:53 AM No comments: Links to this post