This is the season to be thankful for all the blessing that we have here in Colorado Springs. It is so nice to be able to go 5-10 miles and be into wilderness / backcountry trails. We have such an abundance of trails to chose from and I enjoy every day and trail that I find myself on.

I hope that my efforts to map and describe the trails that I have enjoyed has created the desire on your part to check out new trails and experience different parts of our natural abundance.

It seems like I go in spurts. I pick a trail then spend the next month or so exploring all the options that the trail presents. I look for different trails in an area and you may be surprised to find some new and interesting views. I know I have found some unexpected gems in my explorations.

On the website (http://farrunner.com), I am always looking for better ways to present the information about trails to make it easier to find and follow the trails. I am thinking about adding the track information to the website so that it can be downloaded into most GPS units. I have found this useful in repeating a trail where is may not be very well defined and for backtracking when I get away from familiar landmarks. I have heard that there is going to be an advanced GPS seminar at REI possibly next month. You might want to check their website and put it on your calendar. 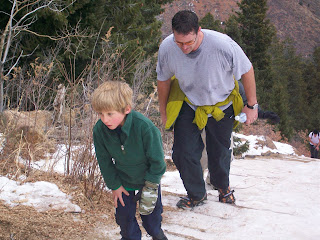 I wanted to give a special high five to Ben who we met on the incline Tuesday. He is 7 and here he is reaching the top of the Incline in fine form. Good work Ben and I hope you enjoy many more climbs in the years to com.

In revising some of my incline pictures on the website, I have tried to include more photos of some of the people I have had encountered on the trails.

I think I will sign off for now. I hope in the coming year I can be more consistent on this blog. Remember the forum where you can post information about the trails you have been on and keep us all informed about condidtions you have encountered to help us plan a more enjoyable hike/bike/run.
Posted by Farrunner at 9:45 AM No comments: Links to this post 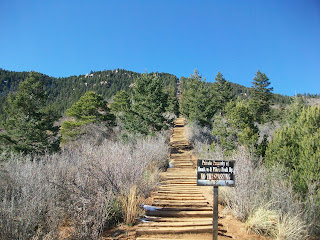 I have been avoiding any posts about the incline because officially it does not exist as a trail. Since this "trail" crosses multiple properties, it has been the subject of great debate in the community. I am never sure why such debate takes forever to complete. It is not like there are many alternative uses for the trail. Although I am not party to the debate, I would imagine that there are about 5-10 issues that are at stake here, but it has taken years to debate them and I am not sure why.

Recent news is that all this is close to resolution. All the parties seem to be in general agreement and maybe it will be official shortly. Now this is what worries me. As soon as it becomes official, I can see the "officials" declaring that we need to put together a plan for the trail...in the meantime, we must shut it down to protect the trail and the people. In the nanny state mentality that exists in most govenment agencies, I do not think that this is out of the realm of possibility. I look back to Cheyenne Mtn State Park and how it was closed to the public while it was updated and planned.

I have posted before how amazed I am at the number of people who come out to climb the incline. I expect the hard core runners and hikes but in addition are people of all types challenging themselves against the climb. More power to them. I would be a shame if the "nannies" try to restrict or curtail this. I know this can be dangerous but it is ones choice and that is how it should be.

All that being said, Tuesday was a beautiful day to be on the incline. Weather was near perfect and views were as usual, stunning. There was some icy footing especially at the top 1/3 of the trail where it is shaded. Ice was prevalent on most of the ties and not any places where the ice could be avoided. Today with the snow falling, I am tempted to head over and do it again, the views when there is a fresh snowfall are just awesome. I have posted some pictures on the website taken at various times of the year.

I have started documenting the Incline for my website. Took pictures, captured the GPS data, and starting to writeup the description for the webpage. Hopefully I will soon have this up on the site.

If you chose to challenge the inclie be aware that it can be dangerous. Loose railroad ties, steep terrain, icy conditions and rapid weather changes can exist. But if it was easy, would we be there?
Posted by Farrunner at 7:30 PM No comments: Links to this post